Minecraft is one of the most popular video games among the challenging boys that I work with. Their parents often like it too because they find Minecraft’s blocky and cartoony characters, animals and monsters reassuringly innocent when compared to the graphic images contained in so many other games. However, Minecraft has caused more serious problems for the families in my practice than any other video game – much worse than any of the violent first person shooter games out there, including Fortnite. There’s no need for alarm. Minecraft can be played safely and enjoyably just by following a few simple rules.

What are Minecraft’s troubling features?

• Minecraft can be highly addictive.

You may have already noticed that children can get very caught up in playing Minecraft. It can be difficult getting kids to stop playing at the end of their allotted time. In more extreme cases, children will push to play Minecraft to the exclusion of other activities and leading to big battles with their parents. Some children will secretly stay up late into the night playing the game.

• Minecraft can expose kids to bullying and exploitation.

Minecraft can be played online on multiplayer servers, some of which can be quite violent. Players attack and kill other players and steal their hard earned (or bought) virtual possessions, or destroy the buildings they have worked hard to build. This practice of stealing from other players or wrecking their creations is referred to as “griefing” in the Minecraft community. These types of attacks can often be more stressful for kids to handle than the more realistic violence of Call of Duty or other war games.

• Minecraft server owners can tempt kids into spending large sums of money (that they often steal from their parents).

Server owners can sell special packages of tools, weapons, armor, and other accessories to players on their servers. These special packages give players such a huge advantage in the game that there is a serious temptation to buy them. I have known kids to spend many hundreds or even thousands of dollars this way, often stealing their parents’ credit card numbers to pay for their Minecraft purchases.

I realize that all of this sounds scary. Minecraft does have positive qualities, however. It’s an incredible medium for creative expression. Some have described Minecraft as “LEGO on steroids.” Gamers refer to Minecraft as a “sandbox” game which, like a real sandbox, can be a place for creative, unstructured play. Minecraft, unlike many other games, has no levels to conquer, no preset objectives to achieve, no predetermined path to follow. What the Minecraft player does is determined solely by his interests and imagination. (As an example of the creative possibilities of Minecraft, here’s a scale model of the Tower Bridge of London created in Minecraft.)

It’s possible, as you read this, that you feel the advantages don’t outweigh the dangers. You may even consider preventing your kids from playing Minecraft. However, doing so runs the risk of creating other problems. When parents ban Minecraft, children often just sneak around to play Minecraft anyway. If your child plays in a hidden way, you won’t be able to supervise his play and you won’t know about the problematic situations he is being exposed to.

How do you ensure that your child plays Minecraft safely? I have written this brief guide for you to better understand Minecraft and supervise its use so that your child can be engaged in a safe and healthy way.

1. There are many different ways to play Minecraft. (What format of Minecraft your child plays determines what if any risks playing the game exposes him to.)

Online forms of Minecraft include opportunities to play on unregulated public servers run by individuals who are unaffiliated with Mojang and Microsoft (owners of Minecraft). Servers typically feature incredible cities, buildings, and games within games (popular games include “prison” and “hunger games”). For many kids, playing Minecraft on servers is the most entertaining form of Minecraft.

Here’s an image from the server Cousinville: 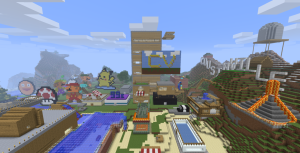 What format your child plays Minecraft on —  single player vs. multiplayer, online vs. offline — determines what risks he or she is exposed to.

While many Minecraft servers are safe, servers are where the greatest dangers are found. Many servers are “Lord of the Flies” like environments where kids can get exposed to bullying. Server owners also profit from selling (at astonishingly high prices!) special weapons, armor and materials that players pay for with PayPal and credit cards. Unscrupulous server owners can even extort payments from players by threatening them with being expelled from the server (which would mean losing days or weeks of accumulated possessions and work) if players don’t pay the fee. This can lead to huge financial outlays and the temptation to steal from parents.

Minecraft like other online multiplayer games also creates a situation where kids can meet with strangers.

Playing Minecraft single player offline is the safest form of Minecraft. Also safe is playing multi-player Minecraft with friends who are present on your home wifi network. These forms of Minecraft furthermore do not provide kids with opportunities to spend large sums of money.

Minecraft programmers are continuously adding new features to the game. There are thousands of Minecraft servers with dozens more being added every day. You have to put effort into staying up to date.

3. Play with your child.

Especially with difficult to connect with kids and with kids who are easily overwhelmed by interpersonal interactions, playing multiplayer Minecraft together is a great way to connect and expand their capacity for connection. Your avatars run around in the Minecraft world and interact with each other cooperating, playing in parallel, playing with each other, and maybe sometimes even fighting. This type of interacting has lower intensity making it easier for the kids to begin building up their capacity to engage.

Children are more likely to follow rules that they have a hand in creating. I recommend establishing rules about the following:

If your kids play on servers, look at online reviews of the servers they play on.

Here are some family friendly servers